As designers and purveyors of the slow fashion movement, as well as skilled multimedia artists and music producers, power couple Jillian Ann and Cassidy Haley, co-creators of the brand and lifestyle company RITUAL Fashion have brought together their love of music and alternative fashion to create an unforgettable stage experience.  Jillian and Cassidy found time to talk to us between a decompression session at a Korean bath house and prepping dinner at their home in Los Angeles. These seemingly otherworldly individuals also work hard at keeping themselves grounded.

While music and fashion have historically complimented each other, RITUAL’s presence at Bass Cabaret: Queen of Pearl’s Tea Party will inevitably aid in merging the underground electronic music scene and a more fashion-forward audience in San Francisco.  During their performance, Jillian & Cassidy will debut original compositions in the theme and spirit of Alice in Wonderland, upon which the party is based.  Jillian will reinterpret the Alice character from a high-fashion perspective. The RITUAL crew will also be bringing a caravan of models and close consort to walk in their fashion show, who will each be styled with a particular nod to the Wonderland characters. Take a look at the music video for their latest single, “Breathe” to get a sense of the incredible pieces they will be bringing to the runway this Saturday.

Jillian Ann and Cassidy Haley collectively embody both male and female aspects and transcend traditional definitions around human sexuality. By design, the RITUAL Fashion clothing line wears equally well on men and women. Even though some of the clothing silhouettes take a traditional female or male form, RITUAL’s intent is to honor both the male and female physique, and to encourage people to wear the pieces that suit them best. With similar missions and values, RITUAL Fashion and Bass Cabaret have come together to celebrate a love for alternative, high fashion, performance art, and aesthetics.

Bass Cabaret: What are you both inspired by?

Cassidy Haley: Well for me, above and beyond anything else, it’s telling stories that mean something and that matter. All of the artistic mediums that we bring to the table are all about telling a story. And there are so many stories to tell and it’s really the most fascinating art form to me. The first thing that humans ever did was tell stories to each other that inspired them, tales of heroes, and life lessons, and morality. Whenever I’m designing something or writing a piece of music, it’s always about a story.

Jillian Ann: I have a lot of dream inspirations, where I see things in sleep or in my mind, or fantasy, and I’m definitely influenced by the storytelling, but also a lot by the esoteric-fantasy-mystical realm in art and music and playing with merging them into actual, tangible things either sonically or physically.

Bass Cabaret: What is it like to work with your fiancé/fiancée?

Cassidy Haley: The best thing ever, and probably the most challenging thing too… but I couldn’t imagine it any other way. For me, my art is my life, and there’s really no distinction between my life goals and my profession. Being with somebody who is on that journey with me means that I get to hang out with them all the time and do what I love, so it’s amazing. Also, when you have that level of intimacy with somebody, and you’re really willing to take it there, and shed all the layers and insecurities and things that you never tell anybody else, you just have such a deep connection to make decisions and be creative together. There’s like no barriers, so I love it.

Jillian Ann: I would concur that it’s the most rewarding and challenging simultaneously. I think that being in projects with people I wasn’t in relationships with and being in relationships with people I wasn’t being creative with definitely I feel like the kind of alchemy that forces you to evolve whether you want to or not in any area that you may have any hiccup in either creatively or personally, that can be challenging at times because you know, if you’re in a band or music project with somebody and you’re not intimate on another level then you kind of go home and shut the door and talk to your lover or whomever about it all night, but when your lover and your main creative partner are the same person, sometimes it creates this circle which can be amazingly inspiring and also causes you to have to evolve maybe at a more rapid pace because it’s so all inside of each other. (Jillian laughs) I know that sounds kind of perverted, and it is, but it’s definitely been very transformative and I’ve been able to break new creative barriers faster than I would have otherwise, so it’s a good thing. 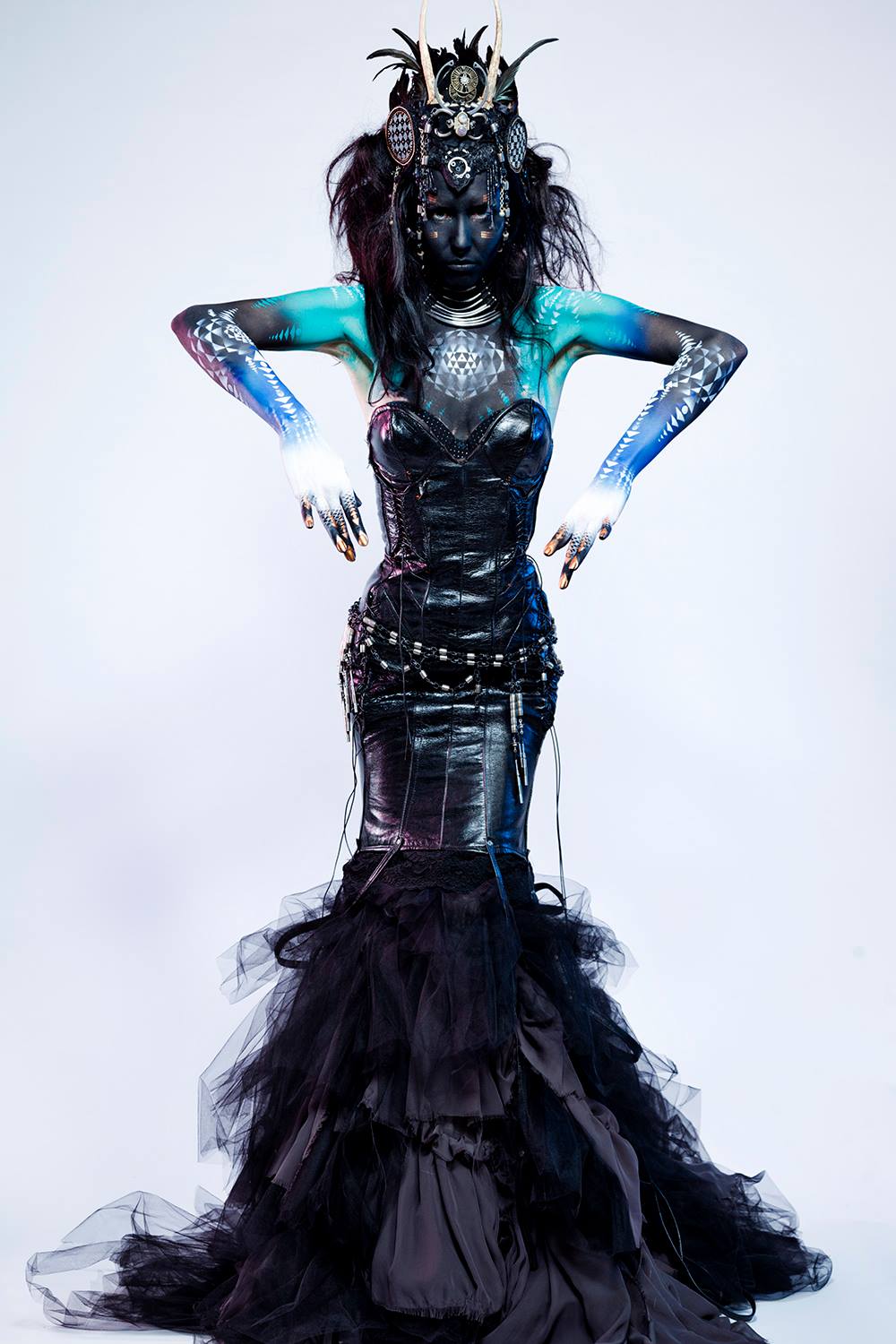 Bass Cabaret: What are you bringing to the show in terms of fashion pieces? Is there anything we should know in advance to keep an eye out for certain pieces you’ll be bringing? We’ve also heard that you’ve created some pieces exclusively for this event.

Cassidy Haley: We’re kind of using this as an excuse to design pieces for our new collection, so it will be like a really early preview of some of the prototypes that we’ll put into our collection in the future. We actually got really excited and inspired by the theme of the event and we’re actually going to be making some outfits that really fit within that theme.

Jillian Ann: We are creating as much as we possibly can based on the theme which is really inspiring and fun, and back to the fantasy element which I feel we are both inspired by with our design work. From our old collection, we’ll be pulling from both collections and also bringing in some of the more one of a kind pieces which I can definitely say for sure.

Bass Cabaret: Jillian, are you going to be playing Alice?

Cassidy Haley: Oh ya, she’s Alice for sure!

Jillian Ann: That’s all we can say about it. The stage is like one of those sacred places, like my bed. Some things you can talk about, and others it’s just better to experience it. 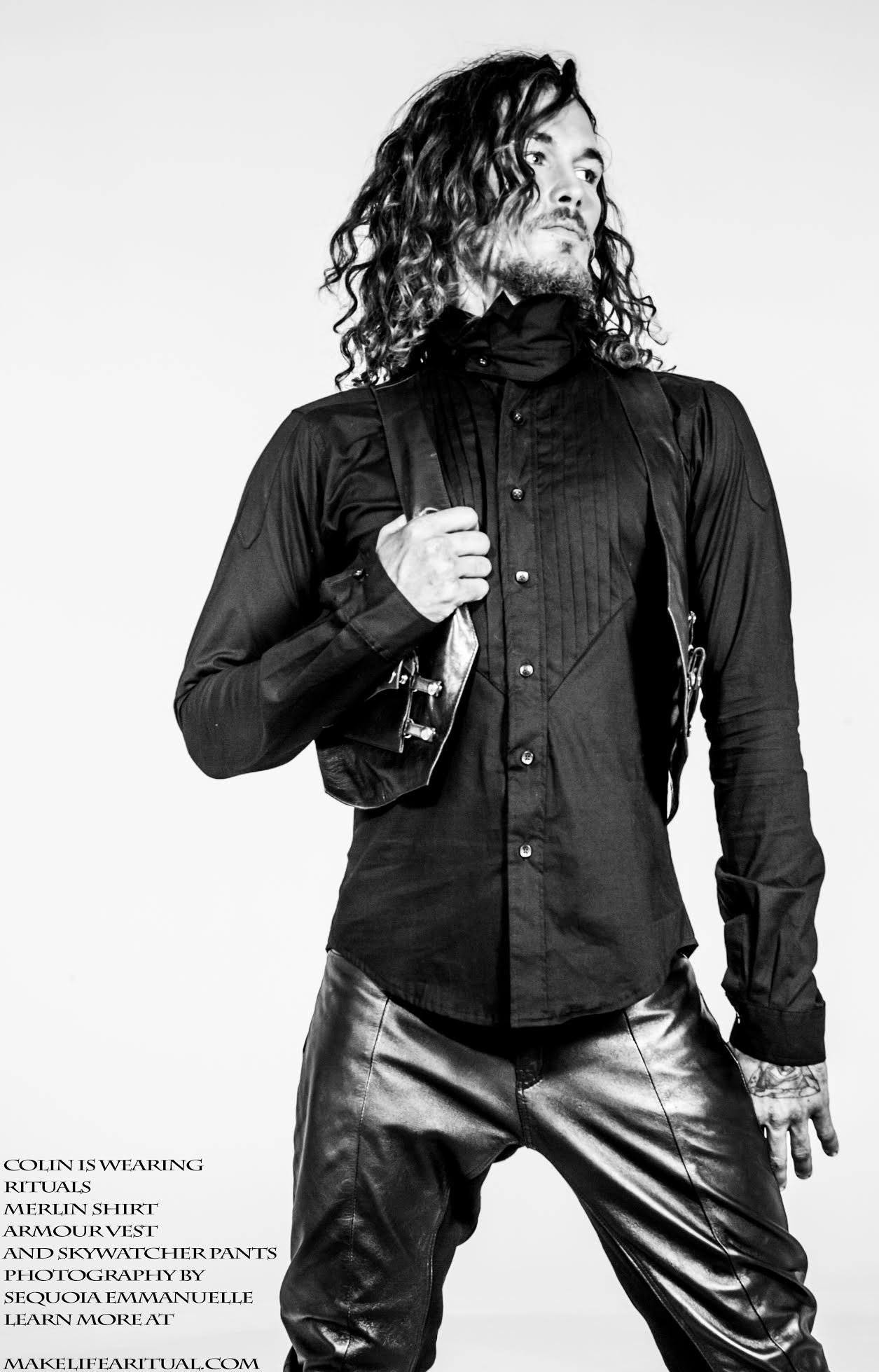 Bass Cabaret: How many models will you be bringing with you from L.A.?

Cassidy Haley: We’re bringing some of our favorite people with us, and it’s going to be about eight or nine of us in the show including models, performers, and we’ve got an amazing violinist, HANNAH. For people that we work with, we are more interested in working with people that inspire us, and that really have something to say as themselves, and not just a pretty face. In the fashion world, models usually are just coat hangers; they’re very neutral they’re just there to hang the close on. For us, we actually take the opposite approach where we find people that we just adore and really inspire us, and we want to show them to the world – so, it’s going to be a fun ride bringing up our favorite people. 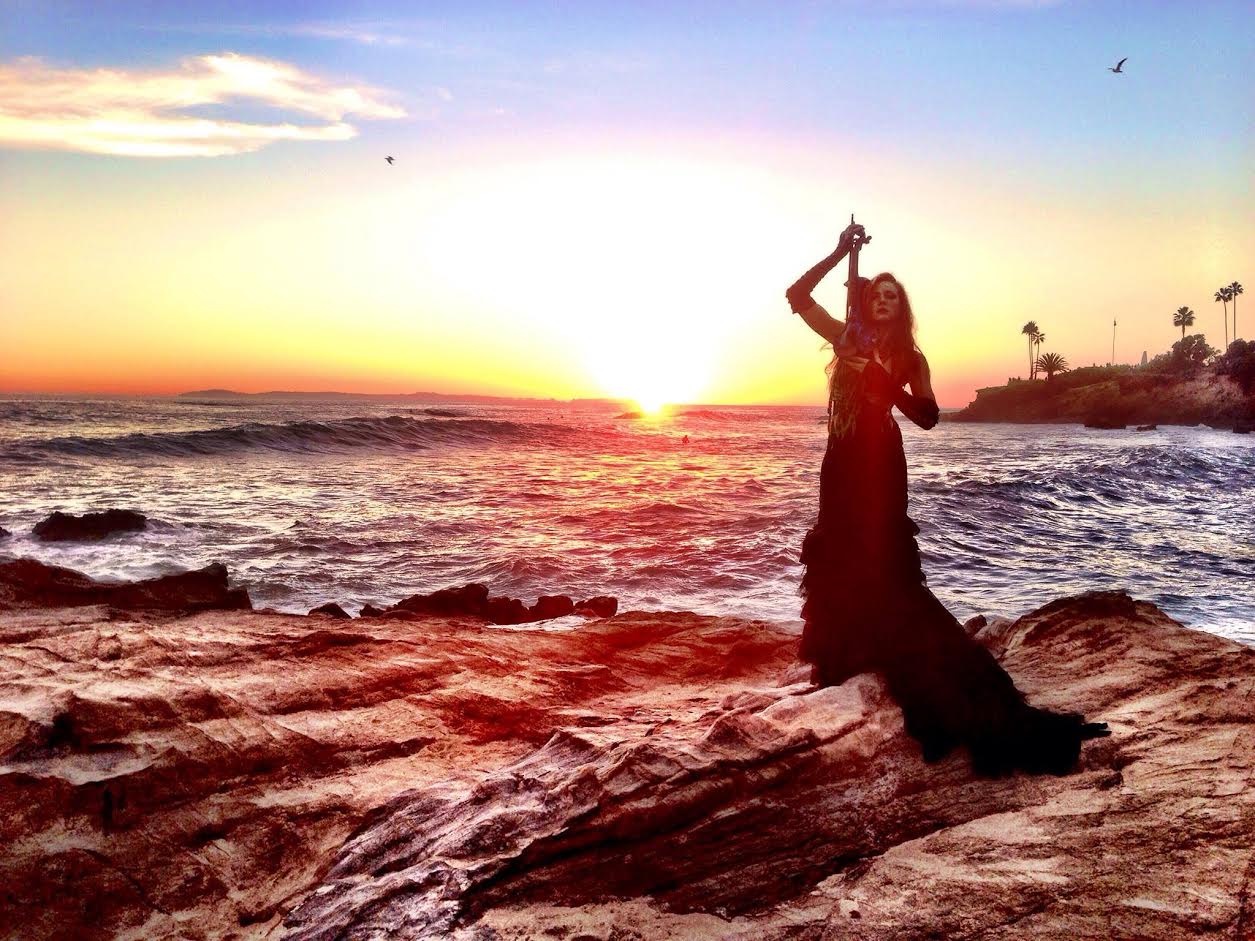 Bass Cabaret: How has women’s empowerment played a role in the success of RITUAL fashion and your overall philosophy?

Jillian Ann: I feel like it’s incredibly important for the feminine energy, both in women and in men to evolve to a place that’s being able to uplift each other and support each other to express ourselves fully and really help each other grow. Being involved in various different industries for a really long time whether it was modeling or music or all of that, i’ve learned that the support of definitely women with each other but also just men with women and everybody ultimately supporting each other in a positive way and the decrease of back stabbing jealousy and pettiness and insecurity, it’s just necessary for everything to evolve and for everyone to be much happier. And so it’s really cool with Bass Cabaret to have a focus on that a) female expression being really supported and b) also the female empowerment. I like to say feminine because I feel like ‘female’ might relate  to a gender and the female energy isn’t necessarily gender-based.

Cassidy Haley: It’s interesting because part of our whole stance is really transcending, and really allowing everybody to be everything. She’s really helped me to embrace my masculine side and really explore the idea of being a strong man and being masculine in the world. I think I’ve helped her to be even more feminine as well, so we’ve kind of balanced each other out in an unexpected way. Almost the opposite of what you’d think, but by allowing  ourselves to be whatever we are, feminine or masculine, we’ve been able to really balance each other out.

Bass Cabaret: How does your collective design process work, in both fashion and music?

Cassidy Haley: We definitely both do everything, across all of the artistic mediums we both are totally equally and one hundred percent together on every step of the process. Within each thing, we definitely balance each other out and we each have our strengths and weaknesses that just really compliment each other.

Bass Cabaret: We heard that you’ve produced some original music for Bass Cabaret — can you tell us about it?

Cassidy Haley: Our whole album we’re working furiously on and using this event as an excuse to really push it forward.

You can check out Jillian Ann & Cassidy Haley’s work on their Facebook Page or Website and be sure to check out their set and fashion show this Saturday, November 22, 2014 at Mighty in San Francisco starting at 10pm.